You are here: Home / Clouds Explained

This page is meant to provide very general information from experience about the formation of clouds in a Maltese context. Until recent times, such information used to be obtained from various sources in the Internet.

To commemorate the World Meteorological Day 2017, the World Meteorological Organization (WMO) decided to launch an international cloud atlas in order to serve as a global, authoritative and a comprehensive reference for observing and identifying clouds. This cloud atlas is used by cloud enthusiasts such as this website and weather professionals alike as an essential training tool for working in the field of meteorology specifically anything related with clouds. In fact, from its launch on 23rd March 2017, maltaclouds is relying solely on this atlas to identify and name clouds including detailed analysis of the weather situations that would have led to that particular cloud formation. It is important to point out that new cloud classifications have been included in the cloud atlas such as ‘Volotus’ that was previously recognized as ‘Altocumulus undulatus’.

The WMO defines a cloud as “a hydrometeor consisting of minute particles of liquid water or ice, or of both, suspended in the atmosphere and usually not touching the ground. It may also include larger particles of liquid water or ice, as well as non-aqueous liquid or solid particles such as those present in fumes, smoke or dust”. The appearance of a cloud is defined by its shape, structure, texture, luminance and colour. Though clouds are very dynamic and continually evolve and transform into other clouds, the huge majority of cloud formations can be broadly grouped into the following classifications:

This refer to clouds that form at an altitude of between 5km and 13km above sea-level in temperate regions such as the Maltese Islands and the Mediterranean. In Summer and Autumn, these clouds are generally the result of leftovers from cumulonimbus clouds either locally or from nearby countries (Sicily or Tunisia). Cirrus and Cirrocumulus clouds tend to form when there is a certain amount of wind shear hence turbulence and when the upper-air is moist and unstable. Stratified high clouds (Cirrostratus) generally form before the approach of a warm front or sometimes at the edge of an arriving low pressure system. In fact, halos around the sun or the moon are due to these clouds when they are very thin. They also form under high pressure systems in quiescent conditions when the air above 5km is so moisturized that ice fog forms at that level. This is especially enhanced if some dust is present or an aeroplane happens to pass by. In the latter case, an artificial cloud called “Cirrus homogenitus” previously known as a contrail is formed and could also evolve into other cloud species such as cirrocumulus. Though this cloud is harmless and has nothing to do with alleged chemtrails, it is known to directly contribute to climate change by raising the night-time temperature on the ground in an otherwise cloudless sky. 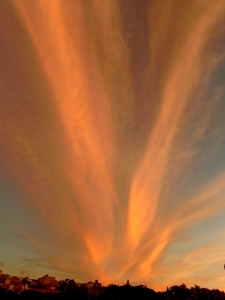 This refer to clouds that form at altitudes of between 2km and 7km above sea-level in temperate regions. The exception is nimbostratus clouds which could form at lower altitudes than 2km and may even extend into the upper-levels especially if it has a high base. All Nimbostratus clouds produce rain and are layered as the moist air rises slowly. Nimbostratus clouds (producing incessant rainfall) rarely persist for long hours over the Maltese Islands and when they do form, it’s generally due to Easterly gales in Winter whereby moist-laden air from the sea allow condensation to steadily occur in slowly rising air.

The same mechanisms that form cumulus and stratus at lower levels apply for mid-level clouds except that the surface air may be cut off (through convective inhibition) from the formation of such clouds and that they are found at higher altitudes. In fact, most of the rare thunderstorms that occur in the Maltese Islands between May and July are generated from Altocumulus Castellanus clouds, now officially recognized as “Cumulonimbus altocumulonimbogenitus”. These thunderstorm clouds bring little to no precipitation over the area since most of their rainfall dries out in the arid conditions present at that time of year. Rarely, a heat burst may occur whereby temperature increases rapidly due to the compression of precipitation-cooled airmass whose rain dries out well before reaching the surface. 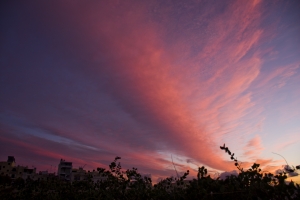 This refer to clouds that are mostly confined to altitudes of below 2km above sea-level including fog which is simply defined as a stratus cloud on the ground.  In Summer, cumulus clouds tend to develop on land due to prevailing winds encountering sea breezes and aided by the hot ground but inhibited by the upper-level Azores high pressure cell (which is why Summer thunderstorms are rare). During the rest of the year, these are developed due to instability (cumulus congestus eventually growing into cumulonimbus) and also by rising air thermals when the air is heated from below but encounters stable layers such as in the case of humilis and fractus. In fact, the latter 2 sub-species are known as fair-weather cumulus. Sometimes, low-level clouds could also be the result of anthropogenic actions for example the cumulus homogenitus cloud that formed in the Maltese Islands due to the Sant Antnin recycling plant fire on the afternoon of 22nd May 2017 and stratus clouds may be enhanced by local pollution as it introduces extra dust particles through which water molecules may bound together. 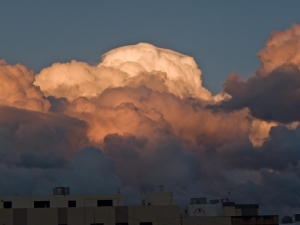 Stratified clouds (stratus and fog) in Malta are generally limited to the night and early morning hours. This is so because the sun’s strength tend to burn these clouds off quickly (even in Winter) and sometimes even breaks any arriving nimbostratus into isolated showers. In addition, any arriving low pressure system in Winter encounters the still warmer sea. This increases atmospheric instability over the area resulting in the formation of cumuliform clouds rather than nimbostratus. Stratus clouds may sometimes form locally over the Western side of Malta given very moist Westerly winds due to Malta’s topography (The Western side of Malta consist of steep coastal cliffs rising up to 230 metres above sea-level) enhancing condensation.

Although cumulonimbus clouds have been identified as low-level clouds in the WMO’s cloud atlas, it is common for such clouds to extend into all the levels of the atmosphere. In fact, such clouds could be up to 12km high! Sometimes, such cloud can totally darken the normally blue Maltese skies making it look pitch black as if it is night. However, it normally only lasts for a couple of hours.

In Malta, cumulonimbus clouds are most common during late Summer and Autumn when cooler air masses dragged by low pressure systems from Europe and the Atlantic make their way into the Mediterranean whereby they contrast with the warm, moist air and warm surface temperatures still present over the region. In fact, land and sea temperatures are at their warmest during late Summer. The sea temperature around Malta normally reaches 26°C by late August (or even higher in recent years) before beginning to cool. Such meteorological situation generate lots of instability (sometimes Convective Available Potential Energy (CAPE) of up to 2500J/kg) resulting in heavy convective storms. In Winter, these clouds are usually less severe and produce less precipitation. Of note is that most of the precipitation that falls in Malta comes from Cumulonimbus and Cumulus Congestus (also known as “Towering cumulus”) clouds. 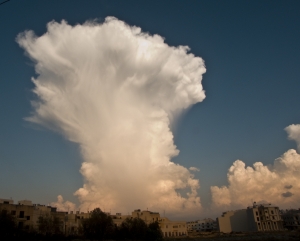 Cumulus and Stratocumulus clouds are the most common cloud types in the Maltese Islands.

Note: The information provided here is intended to acquaint the visitor with basic cloud terminology in relation with the Maltese prevalent weather conditions in order to be better able to understand and appreciate my website! For expert cloud information, kindly refer to the International Cloud Atlas.