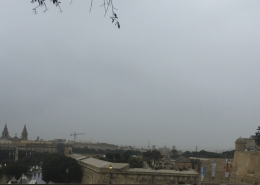 The photographed cloud has indistict feautures typical of Nimbostratus that developed from Altostratus opacus at a height of between 2km and 4km hence safe to presume that falling precipitation consisted of snow flurries. From the photo and confirmed by the very weak pulse rate of the rain radar on the fourth thumbnail, it looked like most of the precipitation was evaporating before actually reaching the surface hence the supplementary feauture virga. As a result of the very strong Westerly wind, the virga fallstreaks were blasted in the air probably taking on a pouch-like appearance very similar to mamma clouds. In the background, cumulus clouds could be observed due to the strong ‘Thermals’ as cold air swept over a relatively warm Mediterranean Sea. The first thumbnail is another view of the same nimbostratus cloud which seemed to be continuously changing shape and getting wave-like features as a result of the buffeting effect of the wind. The second thumbnail shows the arrival of altocumulus undulatus clouds in the afternoon following the low pressure system in the fifth thumbnail moved further eastwards resulting in a decrease of the surface wind. The visible satellite image on the sixth thumbnail showed the cloud system that was associated with the low pressure area over Southern Italy.